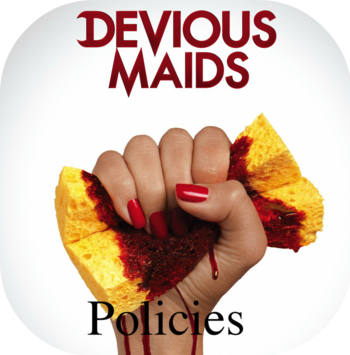 All the rights that are made for users on the wiki are allowed within a reasonable limit.

Here are some guidelines to editing around our wiki to make sure pages stay neat and within uniformity. Please note that any violation of these guidelines will most likely be reverted.

ANY OTHER IMAGES ADDED TO THE GALLERIES WILL BE REMOVED

Here is an example of a character gallery (from Peri's page):

Marisol attends the burial of Flora Hernandez, watching from a distance. As Flora's friends - Zoila, Valentina, Carmen and Rosie, four maids - leave after the ceremony, Marisol overhears them talking about a secret that Flora was keeping and shared with them, and that might have gotten her killed. One week later, Marisol auditions for a job as live-in maid for the Stappord couple, consisting of elite attorney Michael and his lovely second wife, Taylor. Taylor doesn't respond well to Marisol's attitude and finds it odd that she sounds so sophisticated, but they eventually hire her as a test. Marisol tries to engratiate herself to Taylor by giving her advice on how to deal with the problem of Michael's ex-wife, deranged decorator Olivia Rice, but it is to no avail. She then meets the other maids, and tries to ask them about Flora, but doesn't get much of a response, only that the people she worked for - the Powells - are weird. Marisol also offers to clean the room where Flora was murdered, in the Powell house. There, she meets the creepy Adrian Powell, who was having an affair with the victim. He takes an eerie liking to Marisol. Later, when the Stappords throw a dinner party for Michael's birthday, it is crashed by Olivia, who causes a scene. Marisol is forced to kick her out of the house, and in doing so, Taylor tells her she can work there for as long as she wants to. At the end of the evening, Adrian confides in Marisol that he's sure she's not really a maid, and can't wait to see what she's doing there. Marisol then visits her son in jail, and promises that she's working on getting him out of there. ("Pilot")

Obviously, if the categories are not applicable, do not add them. For instance, for a character who did not appear in the first season of the show, don't add them to "Season 1 Characters".

This is NOT a spoiler free wiki, so you are responsible for any information you acquire that you did not already know.
Community content is available under CC-BY-SA unless otherwise noted.
Advertisement
Follow on IG Newsletter Join Fan Lab