Devious Maids is a show about Beverly Hills maids who have to juggle their own ambitions and dreams with the demands of their rich employers. Marisol finds herself acting as a support system to Evelyn in the wake of a big life change. Meanwhile, Rosie's positive and sunny disposition leaves much to be desired by her new boss, Genevieve who is acclimating to a household without Zoila's honest and acerbic humor. Carmen continues to pursue her singing career until her cousin Daniela comes to town and shakes things up. Marisol also finds herself in a new relationship, which eventually becomes a complicated triangle when her old flame Jesse reappears.

Refresh for another quote

Where Are They Now?

If you miss the Devious Maids cast, check them out in their current projects:

Go to these sites for info or for help with your own wiki! 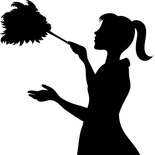 Retrieved from "https://deviousmaids.fandom.com/wiki/Devious_Maids_Wiki?oldid=34995"
Community content is available under CC-BY-SA unless otherwise noted.