The show opens with the murder of maid Flora Hernandez (Paula Garces) on a summer night of June 2013, and a man by the name of Eddie Suarez (Eddie Hassell) is arrested for the crime, which he allegedly did not commit it. His mother, Marisol (Ana Ortiz) takes a job as a local Beverly Hills maid for Taylor (Brianna Brown) and Michael Stappord (Brett Cullen) in order to befriend three other local maids that were once friends with Flora. These include Rosie Falta (Dania Ramirez), a sweet and kindhearted maid who works for movie actors Peri (Mariana Klaveno) and Spence Westmore (Grant Show), and ends up having an affair with the latter; Carmen Luna (Roselyn Sanchez), an aspiring singer who works for Latino popstar Alejandro Rubio (Matt Cedeño), and eventually falls for her co-worker, Sam Alexander (Wolé Parks); and Zoila Diaz (Judy Reyes), longtime housekeeper for Genevieve Delatour (Susan Lucci). Zoila's daughter, Valentina Diaz (Edy Ganem), also stars; a 19 year old wannabe fashion designer who has the 'hots' for Genevieve's son, Remi (Drew Van Acker). The season wraps up with Marisol discovering who killed Flora, and her son getting out of jail; Peri finds out about Rosie and Spence's affair and gets revenge by calling immigration; Carmen agrees to marry Alejandro in order to make the press believe he is not a homosexual, but this leads to the end of her romance with Sam; and Zoila has to wish her daughter a farewell as Valentina flies to Africa to be with Remi for the next year.

Three months since the truth unfolded about who truly killed Flora, and the maids move past the tragic incident and continue moving forward with their lives. Marisol has found love in the mysterious Nicholas Deering (Mark Deklin), but it doesn't take long for her to realize there's more to him than he lets on... especially regarding his maid, Opal (Joanna P. Adler). Rosie's trial is held, and she is permitted to stay in the U.S. for the next six months until pleading for asylum. During this time, he romance with Spence comes to a bitter end, and she finds work as a maid for Kenneth Miller (Willie C. Carpenter), a post-stroke patriarch and his dysfunctional family. Carmen embraces the life of being a popstar's fiancé, but after Alejandro's sudden death, she ends up right back where she started, now working as a maid for none other than a recently divorced Spence, and having to deal with his mentally unstable nephew, Ty (Gideon Glick). Zoila's marriage to Pablo (Alex Fernandez) comes to a sudden end, but she soon finds love in chef Javier Mendoza (Ivan Hernandez), while also reconnecting with Valentina, who has returned home from Africa early due to her and Remi's sudden breakup. She begins seeing a poolboy, Ethan (Colin Woodell), while working as the new maid for the Powells, who, after a home intrusion, decide to hire the bodyguard, Tony (Dominic Adams), who soon enters an affair with Evelyn, something that hurts Adrian more than he expected. The season wraps up with Marisol discovering Nick's secret, and forcing him to confess to those he hurt the most: the Powells, which helps the couple finally forgive one another and move forward, especially with Tony gone. Rosie helps unite the Miller family and leaves to marry Spence, while Carmen loses her job, but meets the handsome Sebastien (Gilles Marini), who promises her a meeting with a record producer. Zoila chooses Javier over Pablo, only to learn she is pregnant and does not know who the father is, and Valentina reunites with Remi after Ethan flees the town. They all come together at Rosie and Spence's wedding; however, in the closing moments of the finale, Ty drives by shooting at all those he can in hopes of hitting Valentina, but all that remains seen is a blood-covered bouquet...

Rosie wakes up in the hospital four months after Ty staged a drive-by shooting outside her wedding, having been shot along with the likes of Pablo who, unlike her, didn't make it. His kidney, however, did make it to Genevieve, who in the meantime helps Zoila deal with the fact that she's unaware who the father of her child is. After finding out that it's Pablo and not her fiancé Javier, she fears he may leave her... and he ultimately does, following the departure of Valentina and Remi for New York. At the wedding that never happens, Rosie's first husband Ernesto (Cristián de la Fuente) returns and, to Spence's dismay, she ends up reuniting with him. Carmen continues her affair with Sebastien while Marisol, who starts a placement agency for maids after publishing a bestselling book, finds her a job with the Powells (where she doubles as Adrian's dominatrix for a while), who employ Sebastien as their realtor after a human leg ends up on their front lawn, belonging to murdered tennis pro Louie Becker (Eddie Mills). This is after the Stappords are revealed as having returned to Beverly Hills with a new daughter in tow, Katy (Grecia Merino), and the maids' new friend Blanca (Naya Rivera) begins to work for them... until she's kidnapped after her discovery of a bloody scene on Taylor's couch. She is hanged and framed by an unknown assailant, and the Stappords' next maid, Rosie, makes it her mission to find out what really happened. She does this by snooping around Taylor's home and discovering Katy's origins; as does Ernesto, who attempts to have the little girl kidnapped so that the drug cartel which he lied about being a prisoner of will let him walk free forever. This leads to Spence being beat up and he loses his memory; enter Peri. Aside from foregoing a doomed romance with Jesse Morgan (Nathan Owens), Marisol too does some snooping and learns that Olivia Rice set Taylor up to have an affair with the murderer. Zoila's friendship with Genevieve is fractured following the latter's relationship with Dr. Neff (John O'Hurley), who wants the maid gone, and the two end up in couple's therapy before Zoila goes into labor; there are complications. Carmen's affair gets out of hand when Sebastien's wife Jacklyn (Michelle Hurd) offers to sign her, eventually finding out and forbidding Carmen from making music ever again. The season ends with the revelation that Sebastien is in fact the killer and, after the Powells decide to divorce following the loss of their beloved foster son Deion (Issac Ryan Brown), a hostage situation leads to their house being exploded, and, while Michael and Sebastien are dead and Taylor assumes a new identity along with Katy, Adrian's fate is left uncertain.

Six months pass, and Adrian is faking paralysis to hold on to Evelyn, but she learns the truth and leaves him. This lands her with a job and a boyfriend, James Hamilton (Sean Blakemore), although she grows tired of him being "too good". Meanwhile, their maid Carmen is distracted by her own drama: Daniela (Sol Rodriguez), the daughter she gave away to her cousin Josefina (Elizabeth Rodriguez), shows up, and they share a rocky relationship that's enhanced when Danni learns the truth of her parentage, while on the side she dates Jesse. He in fact never left town and only said that to avoid Marisol. This spurs Marisol into dating someone new too, Peter Hudson (James Denton), but things to get complicated when he turns out to be the ex-husband of Genevieve and the two women war over him, and further complicated when Marisol sleeps with her ex. All the while, her book is being turned into a film, with Peri Westmore initially starring in it. She has been brainwashing Spence for months, with the help of a cult known as "The Circle", but winds up brutally murdered after he regains his memories, leading to his arrest. Rosie, who meets Peri's sister Shannon (Katherine LaNasa), takes it upon herself to prove his innocence while also working as Genevieve's maid, for Zoila is too angry to return after the loss of her baby. Instead, she starts working for an out-of-town fashion exec (Kate Beahan) and dates her neighbor Kyle (Ryan McPartlin), under the pretense that she owns the house she's working in. His mother Frances (Stephanie Faracy), as The Circle's leader, disapproves, and Zoila's charade falls apart when her boss returns and the cult skips town - but not before an unlikely friendship with Adrian allows her to forgive Genevieve. The latter realizes she was once raped by Hugh Metzger (Sam McMurray), who Rosie figures also raped Peri and fathered Tucker (Carter Birchwell). However, it was his daughter, Gail Fleming (Julie Claire), who killed the famous actress, and Rosie is able to expose the truth, free Spence and announce her pregnancy in one fell swoop. Zoila returns to working for Genevieve, who's now dating a woman named Lori (Sharon Lawrence); Carmen makes amends with Danni, who lies about her birth father being dead; the Powells are unsure whether or not to divorce after all, and Marisol chooses Peter, going on to plan to marry him a year later... except, she goes missing on her wedding day, and foul play is suspected.

For more information about the cast, see Cast List.

Devious Maids features a large ensemble of cast members, listed below are the actors of the series who have, at some point, been credited under "Starring", indicating that they are main cast members. They are ordered alphabetically, and the periods in which they were regulars are featured in brackets, except for those who were always such.

The pilot is based on the Mexican TV series, Ellas son la Alegría del Hogar, which translates to English as "They are the Joy of the Home" and was heavily influenced by Cherry's previous series, Desperate Housewives. The Mexican series is based on an original concept by Gloria Calzada, Juan Meyer and Salvador Rizo. The American adaptation was to follow four maids with ambition and dreams of their own while they work for the rich and famous in Beverly Hills, California.

ABC ordered the pilot on January 31, 2012, but ultimately decided not to pick it up May 14, 2012. However, Lifetime chose to pick it up June 22, 2012, ordering thirteen episodes for the first season. As a nod to the upcoming series, one of the leading stars, Roselyn Sanchez made a cameo as her character in the series finale of Desperate Housewives, and from there, numerous other actors who once featured in Desperate Housewives go on to portray roles in Devious Maids as well.

Devious Maids was renewed for a second season on August 13, 2013, consisting of 13 episodes, and again September 26, 2014 for its third, consisting, once more, of 13 episodes. However, joining Marc Cherry as showrunners as of the third season are Brian Tanen and Ric Swartzlander. 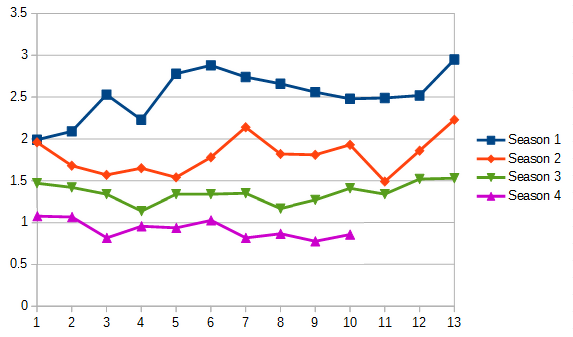 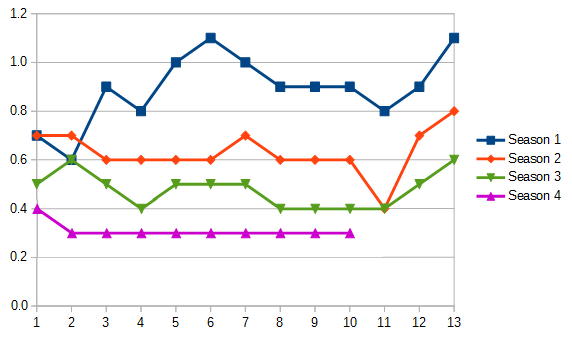